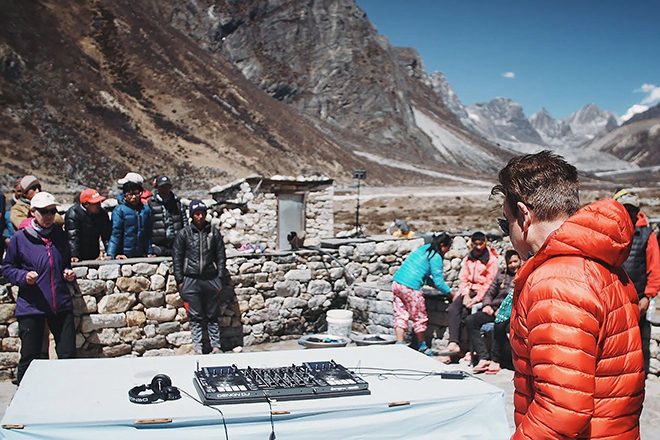 Leave it to electronic music's pioneer Paul Oakenfold, who is credited for introducing the dance music and DJ wave to Las Vegas and collecting first accomplishments including playing on The Great Wall of China and on Coachella's main stage, to continue breaking new ground even at age 53.

To celebrate the 30th anniversary of Second Summer of Love, Oakenfold's fateful trip to Ibiza that eventually birthed club and nightlife culture as we know it today. On April 11, he plans to hike then play a show at the base camp of Mount Everest at an elevation of 17,000 feet.

"The audience will probably be sitting mostly," says Nepali DJ Ranzen Jha, who is currently accompanying Paul on the trip. "The air is so thin here, you will run out of breath quite quickly."

Paul is said to have trained for four months leading up to the trip which began in Nepal. The show marks the first of his SoundTrek series, which aims to take music to "many of the planet’s most remote and challenging locations, at the same time raising awareness of environment matters and interacting with local cultures and charities, raising funds along the way".

For this Mount Everest performance, Paul has also been raising funds to help survivors of the 2015 Nepal earthquake, which killed almost 9,000 and left several other thousands homeless.

The show will be live streamed on Paul Oakenfold's Facebook page.